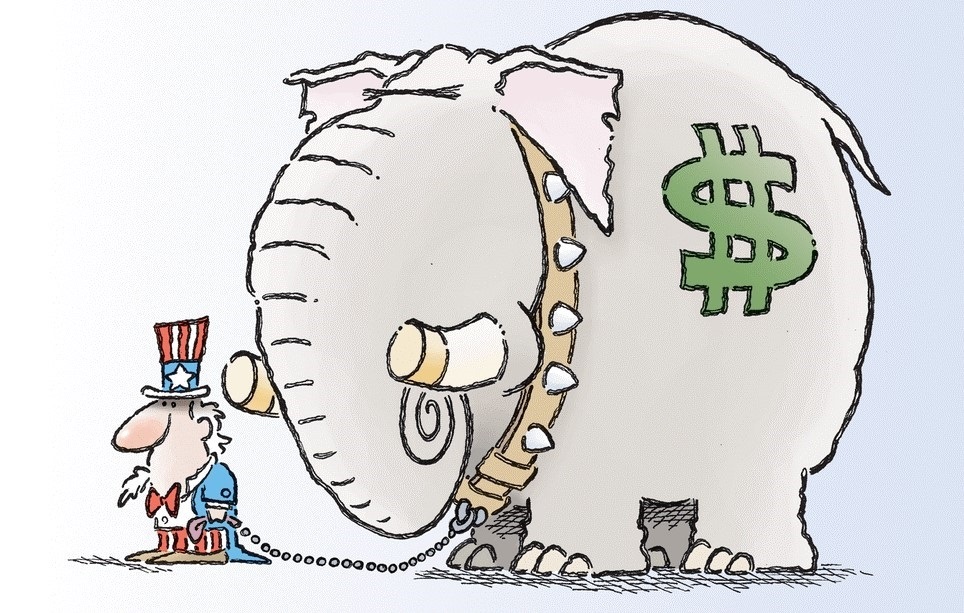 CANEY CREEK REPORT - The Elephant In The Room

Over my long career with big, and not so big, companies, I have had the “privilege” of attending many “offsite” conferences.  That is when you spend a lot of money and precious time away from the office discussing things, team building, etc.  It is usually an expensive waste of time for one reason – The Elephant in the Room.  That is the thing that is lurking in the background that nobody really wants to talk about.

Today, the elephant in the room is the November election.  The talking heads on CNBC and most Wall Street strategists have hardly mentioned it as they breathlessly jump for every uptick in virus infections in Texas as a reason to worry.  The markets, of course, are moving past the virus as evidenced by the record 20% gain in the Standard & Poor’s 500 in the quarter just ended.  More on that later.  Let’s talk about the elephant.

First, no matter the outcome, the sun will rise on November 4, 2020.  So, everyone calm down!  Recently, in a discussion with a friend, he was lamenting the “chaos” in the country.  I laughed as I reminded him that in my 72 years there have been very few periods where it wasn’t “chaos.”  I will admit though that the 24 hours-per-day cable news cycle helps keep the blood pressure up!

Having said all of that, the election will have consequences for the market.  Yesterday, Mr. Biden, who currently has a significant lead in the polls, actually said something in public.  At a fat cat fundraiser, Mr. Biden said he would roll back the Trump tax cuts and do away with “loopholes” like capital gains rates and stepped-up basis.  Of course, that would include the “death tax.”  You didn’t hear that on the evening news, did you?

A basic rule of finance is that it is not how much you make that matters, but how much you keep.  Mr. Biden is talking about big money.  In 2019, estimates are that $28 of the $160 of the earnings of the S&P 500 companies came from the Trump Tax cuts.  So, even if the world were to return to “normal” after the virus, after-tax earnings for the S&P 500 might be like $135 under the Democrats.

The Index closed at 3100 June 30.  The price/earnings ratio on totally recovered earnings would be 23x.  Add to that an increase in capital gains rates to the same rate as earned income and some haircut in the PE is highly likely.  It is also likely that the E (earnings) would be considerably lessened if the administrative state begins to reregulate the economy.

This is not a political statement.  As an investor you must be prepared for whatever the environment is.  A Democratic sweep in November would likely result in a stock market that is lower for longer.

However, what are the odds of a sweep?  Let’s say Mr. Biden is elected and the Democrats hold on to the House of Representative.  But, the Republicans keep the Senate.  The sweeping tax “reform” won’t happen.  If President Trump manages to win and the Dems take both houses of Congress, tax “reform” won’t happen.  Gridlock looks highly likely to continue at this stage.  That is comforting to investors.  But, as the election gets closer, the markets, which are much better prognosticators than any TV pundits, will discount the outcome.

Meanwhile, the S&P 500 has enjoyed a spectacular recovery from the March bottoms, led by the big tech stocks.  The QQQ, the exchange traded fund for big tech was up 30% for the quarter and is now up 17% year-to-date.  The equal weighted S&P 500 which counts the tech giants the same as smaller companies was up 21% for the quarter but is still down 12% year-to-date.  The forward PE for the equal weighted index is 14x.  For the regular capitalization weighted index, it is 25x.

Stocks have rallied from a very oversold position in March when Investors Intelligence reported more Bears than Bulls.  Today, there are close to 60% Bulls and less than 20% Bears.  The markets have responded to a Federal Reserve that is “printing money” and buying any debt instrument offered.  The money supply in the U.S. has grown 24% over the last twelve months.  All of this liquidity is good for the “real” economy as it recovers from the virus shutdown.  In the short run, it is like gasoline on the campfire in the markets.  It cannot continue forever.

With the elections coming into view, valuation stretched, and with sentiments exhibiting a high level of complacency, it is time for a little caution on Stocks.  Take a little off the table to await a better entry point.  Stay away from U.S. Treasury bonds which have yields being managed by the extraordinary measures of the Federal Reserve.  The election is only 4 months away, you won’t miss much if you are wrong.